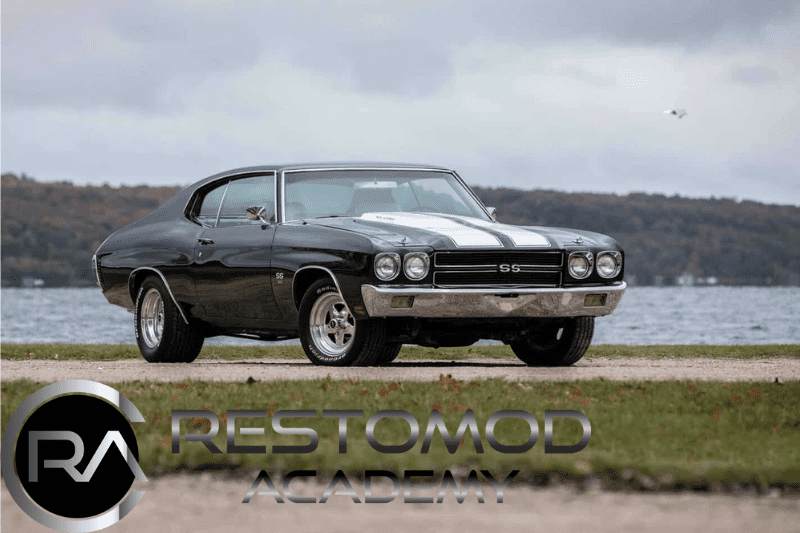 The Chevy Chevelle has become one of America’s most recognizable muscle cars. Over 1,600 movies, including “The Fast and the Furious” and “Jack Reacher,” include the muscle car, making it Hollywood’s go-to. Let’s review The Chevrolet Chevelles History.

Though you may recognize the vehicle for its powerful, adrenaline-pumping characteristics, you may not be aware that it was also a family favorite for its station wagon and sedan models. The Chevelle was a car that could be transformed into whatever you desired. Learn about the Chevy Chevelle’s history and popular choices.

When did the Chevy Chevelle first appear?

First-generation Chevelles were introduced in Chicago in 1963 and sold from 1964 to 1967. What does Chevelle mean? Nobody really knows. Some say the name is a mix of Chevrolet and gazelle, but Chevrolet has never confirmed this.

Because the Impala was Chevrolet’s large car and the Chevy II/Nova was their compact offering, the Chevelle served as a bridge between the two. Chevrolet created the mid-sized Chevelle to strike a balance between these two models.

Chevy sought to produce a mid-size car for buyers who didn’t want a compact or large car and compete with the Ford Fairlane, a popular mid-size model. Chevrolet’s decision to develop a mid-sized vehicle paid off, as 338,286 Chevelles were sold in their first year.

A Summary of the First Generation

The first generation Chevelle was produced from 1964 to 1967. Although the first-generation Chevy Chevelles did not last long, they made excellent use of their time. The Chevelle was available in two body styles: a two-door hardtop known as the Sports Coupe and a convertible. Surprisingly, the Chevelle also produced a few four-door sedans, as well as two or four-door station wagons.

The Chevy Chevelle began with a 220 horsepower engine, but by mid-1964, it had been replaced with the more powerful 327, which produced 300 horsepower. Chevrolet’s commitment to positioning the Chevell as a high-performance vehicle was signaled by this engine change.

The Chevelle was an extremely versatile vehicle due to its numerous model options. The Chevelle’s 115-inch wheelbase was inspired by the very popular 1955-1957 Chevys, which used the same wheelbase size. The wheelbase’s height allowed for easy, smooth riding for passengers, making it a popular choice among many families. Smooth ride, 4-door sedan, and station wagon variants made it perfect for transporting others.

Aside from being family-friendly, the Chevy Chevelle quickly appealed to buyers looking for something fun to drive that they could proudly display outside their homes. Drivers looking for powerful muscle cars found the two-door sports coupe and convertible model very exciting. The addition of a Super Sport (SS) package for buyers to choose from would cement the Chevelle as a high-performance vehicle, with SS models going down in history as some of the most iconic muscle cars.

Almost anyone could find something to like about the Chevelle with all of the different models and options.

The Chevelle SS package quickly became a favorite among those looking for a high-performance muscle car. Those who chose the SS package received the following extras:

SS emblems are frequently placed in the center of the front grill.
Vinyl bucket seats with a floor console and 14-inch full disc wheel covers were also used on the Impala SS
A tachometer mounted on the dash as an option
A cluster of four gauges
Aside from these package features, the original SS had an unimpressive 283ci V8 engine that only produced 220 horsepower. With stiff competition from other muscle cars, the Chevelle would get a 327ci small-block Chevy engine with 300 horsepower. In 1965, the SS received a power boost, with a new L79 350hp engine becoming standard for that year’s Z16 model.

Although only 201 965 Chevy Malibu SS 396 Z16s were produced in 1965, they made quite a stir and launched a new generation of muscle cars bearing the Chevelle SS moniker. Unlike previous SS models, which used small-block engines, the Z16’s engineers wanted the car to run on a big-block V8. The engine they’d end up using for this purpose was the 396, also known as the L37.

This new engine would revolutionize the Chevelle SS, giving it 375 horsepower. In addition to the improved engine, the Z16 would have an appealing design. The vehicle would use the box-style frame of the Chevelle convertible while also incorporating the power brake system and imposing rear axle of the Impala.

Aside from the design, the Z16’s traction and handling were improved with a new suspension. Chevrolet equipped the car with a Muncie 4-speed transmission to give drivers more customization. This SS variant has front and rear seatbelts, a 160mph speedometer, a cushioned dash, and AM/FM radio. These features showed that the car was for racers and regular drivers.

Second-generation Chevelles were redesigned from 1968 to 1972 and sported a more modern, sleek look. As with the original generation, trim options let customers pick between a family car and a muscle car.

There were several packages available for the Chevelle, including the Chevelle 22396, Malibu, Luxury Concours, Nomad, and El Camino Pickup. The second-generation Chevy Chevelle has a reduced wheelbase, rear deck, and bonnet. These features, combined with the contoured sides, led some to believe it resembled a coke bottle.

In 1969, the SS was reduced to being just an engine package rather than a standalone model in the second generation. The cars’ vent windows were also removed. Despite losing some features, the Chevelle got larger, flusher taillights and a chrome grill bar.

The base Chevelle was available with a 140hp Turbo-Thrift six engine, a 200hp Turbo-Fire 307 V8 engine, or a 325hp 327 V8 engine. The Chevelle’s versatility was carried over from the first generation, with numerous engine upgrade options available. For example, the SS396 came standard with a 396 cubic inch Turbo-Jet V8 engine producing 325 horsepower, with the option to upgrade to 350 or 375 horsepower engines for an additional fee.

The Chevelle received impressive engine packages in 1970, with the LS6 offering a mind-boggling 450 horsepower thanks to the addition of a new 454ci engine. Buyers could also improve the performance of their vehicles by installing an air scoop for cowl induction. Chevelle added taillights to the bumpers that year to comply with federal standards.

Regulations changed the car again in 1971, with SS models returning to a small-block 350 engine rather than the large-block engines they had grown accustomed to. This was due primarily to a crackdown on gas-guzzling vehicles. A cheap, powerful “Heavy Chevy” trim level was also introduced. 1972 was a carryover year before the third generation’s release.

The 1977 Chevelle and Malibu series ended the Chevelle line underwhelmingly. Big-block engines had been phased away, and the last Chevelle Malibus weren’t great. The 1977 Chevelles only had 145 horsepower in standard form, highlighting the shift away from mega-powerful muscle cars.

So, what became of the Chevelle?

Big block Chevelles were discontinued in the third generation, and the SS became an appearance package. Since 1978, when Chevrolet began calling their midsize sedans Malibus, 1977 was the last year it utilized the Chevelle moniker. The Chevelle was likely dropped to focus on the company’s brand and minimize costs.

Here are some of the most frequently asked Chevy Chevelle questions:

Which Chevelle Is the Most Popular?

Because collectors’ tastes vary, there is no single model that is considered the most popular. 1968 SS 396, 1969 COPO 427, 1965 Malibu SS 396 Z16, and 1964 Malibu SS L76 are popular Chevelle models. With so many models and bundles, there will be competing perspectives on which is the most popular.

What Is the Most Beautiful Chevelle?

The 1970 Chevrolet Chevelle SS 454 LS6 Convertible’s the most sought-after Chevelle, with some believing that only 20 were ever built. However, because Chevrolet has not shared any fully detailed production numbers, the production number cannot be confirmed. Whatever the case, the convertible Chevelle LS6 is undeniably one of the rarest models available.

Which Chevelle Has the Most Power?

What is the most valuable Chevelle year?

If you like Chevelles, here are some of our favorites: